For some months Ola has been, shall we say…interested ( read obsessed)…in stand up paddleboards. One of his wishes for this trip was to try one! So we asked at the hotel for a nice place, got into our little car, and found a parkingspot close to the beach in question.

I love Corralejo in the morning. There are always a lot of dogs everywhere, everybody is sleepy, and the town slowly wakes up. The watersporters are always early, of course, but still a little sleepy. And the light…beautiful!

Unfortunately the wind was increasing, and Ola didn’t get to rent a SUP. The girl in the store wisely refused, she wanted to make sure his first experience with a SUP was a good one! As I looked at the waves I totally agreed. (But then, I’m afraid of water…)

Si instead he decided to try out his wetsuit (a gift from me) and snorkel (also a gift from me, christmas this time). I stayed comfortably at the beach, with a book and a towel, and my camera of course.

Snorkeler with a backdrop! 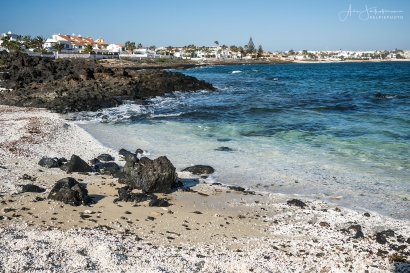 Ola is an experienced snorkeler with a taste for fish, and he soon ran out of interesting things to watch. I was happy to move, and we set out to see El Cotillo! 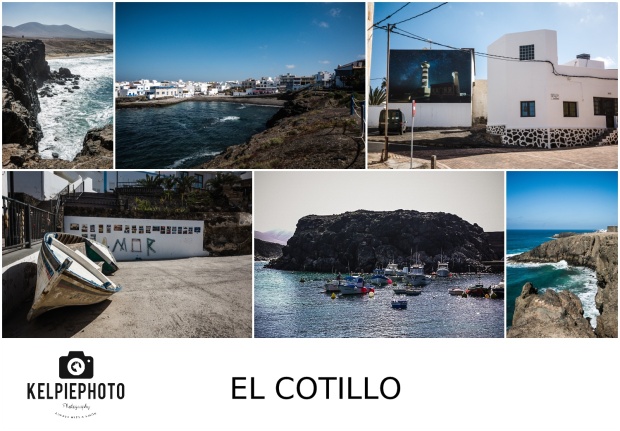 This is a really cute little town, and I highly recommend a visit! The view, the wide sandbeaches perfect for surfing on one side and the lagoonbeaches on the other, and not least – the town itself.

We started at the big sandy beach and enjoyed a fantastic view:

Then we went into town. It’s not a big town, but it’s really charming! Art is everywhere – sculptures and fantastic wallpaitings!

The new harbour is protected from the ocean by cliffs. Or at least so we thought…just a few days later the waves splashed over those cliffs like nothing! Mother nature…

The old harbour is just as charming, and surrounded by nice reasturants and cafés. 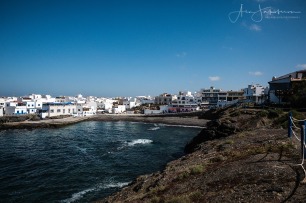 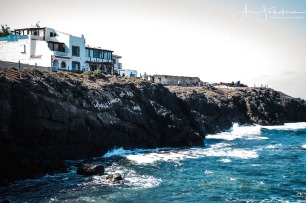 The view of the town is nothing short of spectacular!

We continued our exploration, and found a playground, a beautiful van, more art…It’s a really colourful town! Finally we ended up at a small café called La Lolita where the people were colourful, the coffee nice, and the sandwiches delicious. 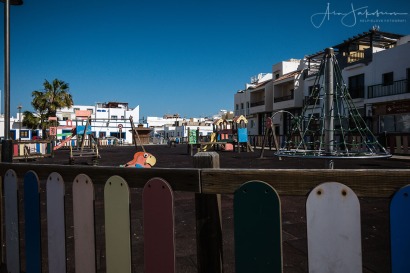 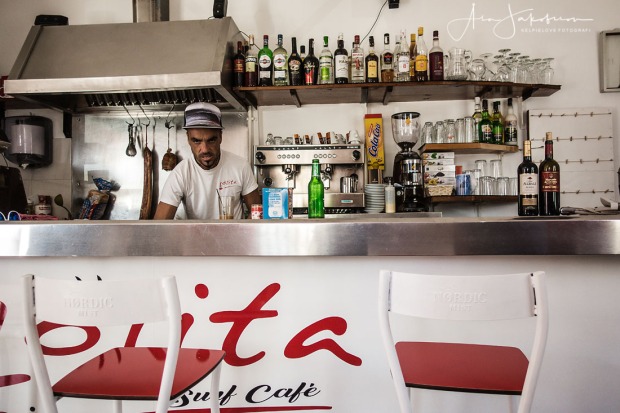 Don’t let his sour looks fool you, he was really nice!

Meanwhile the wind was increasing even more. We gave up on renting a SUP for today, and went to the other side of town where the lagoonbeach – some say it’s the best beach on all of Fuerteventura – was. Some more snorkeling! Maybe these waters would be populated by different fish? And I had brought a small actioncamera that could film under water! 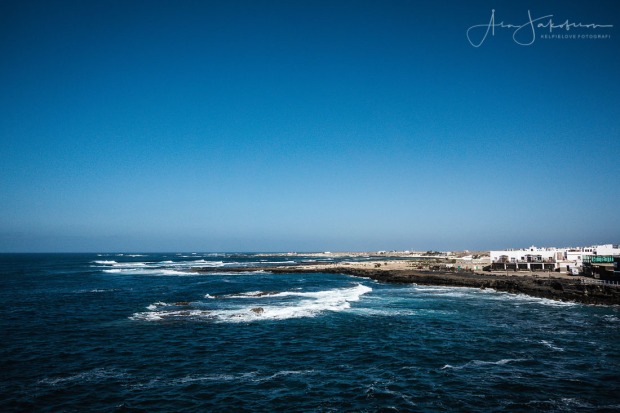 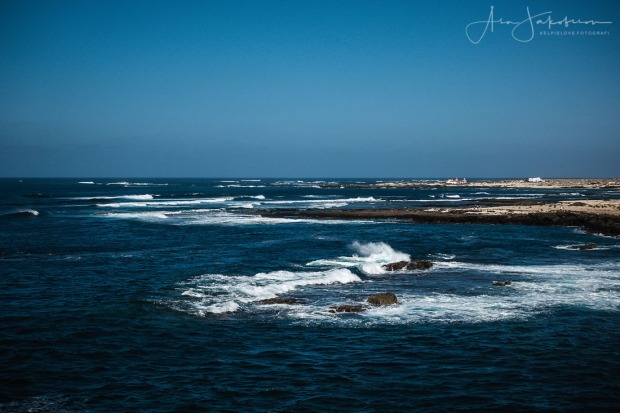 Ola set out to snorkel and film some fish, I had my book, and life was good.

After about ten minutes I scanned the waters to see where he was, but he was nowhere to be found. You know that feeling, when you start to worry but know there’s really nothing to worry about? That hit me. I KNOW he is good in the water, and he is often out of sight (heck, he once snorkeled around a whole – very small but nonetheless – island outside of Borneo!). I decided to wait for five minutes, then go for a closer search.

Almost exactly five minutes later, Ola staggered up on the beach about 50 meters away. He stumbled as he went, I could see no snorkel, and the feeling of worry increased (was he injured?) and decreased (because he was there!) at the same time. I met him halfway.

“The undertow…so much stronger than I ever imagined! I’m exhausted. Never swam like this in my entire life…” He had made a classic mistake. Busy filming fish he went far, fast. And to swim back, against the waves and the current, had been really hard. He lost the camera (of course, he needed his hands!), a wave took the snorkel and cyclop right off his face, and his hands were cut where he had tried to hold on to the reef to get some rest halfway.

We both felt as if we were being warned by Mother Nature: “I’m stronger than you. And I don’t care if you live or die. Think about what you do!” This time there was no really serious danger, thank god!

So we went home, took care of the wounds, and talked about security. About me NEVER EVER letting him out of my sight when he was in the water. About him looking up and checking for land regularly. About taking shorter turns in the water. When Nature speaks we listen and say thank you.

Coming up: we stay on land, and head for the hills instead. And can you learn to surf by observing others?